Alatir, the Mythical Stone, whose history can be traced to the far depths of distant centuries, is frequently seen on Ukrainian embroideries, along with a host of ancient images. This eight-pointed star is one of the oldest known symbols, that depicts the folding and unfolding Universe. 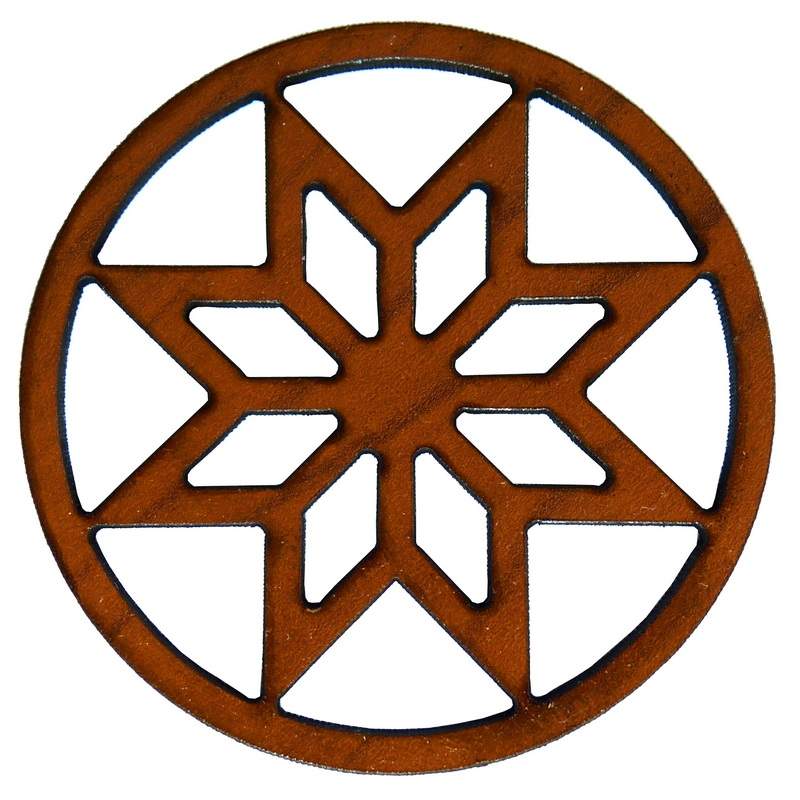 This sign is reflected in countless legends and tales, of the Mythical Stone, the dawn-stone on which the power of the Gods rests and from which it is restored. The sign of the Alatir is like a Divine Eye, from which shines the Light Supreme, God’s good fortune to all the seen and unseen world. Through the Alatir, the Gods communicate with mortals. Into the Alatir is engraved the wisdom of the Universe, and its sacred symbols state Universal Laws. An image of the harmony of the universe, Alatir also displays the intersection of power lines, to form a holy place, a place of power, ideal for a pagan temple.

From antiquity to the present day, the Alatir has been embroidered on the garments of people of knowledge and wisdom, and also as a ‘hex,’ a sign of protection, for those about to embark on long, dangerous journeys. As a ‘hex,’ the symbol calls the power of the universe to the aid of those for whom it is created. The embroidered image of the Alatir can grant vital energies, and understanding of magical pathways. As the Mythical Stone already contains in its imagery all other symbols of protection, all other amulets are only a small manifestation of its power. The sign is as suitable for men (as a manifestation of the God), as for women (as a manifestation of the Goddess-Protector).

The Alatir is a symbol of unification, and of sacrifice to the highest power, a sign of the Universe that contains imagery of all Vedic beliefs. Direct (male) and diagonal (female) crosses symbolize the birth of harmony (integrity, accord). The eight-beam sunrise symbolizes the eight principal annual holidays: four male and four female. It is also the image of four manifestations of life in ‘Yav,’ the world of form: mineral, vegetable, animal and human, and the four Slavic races: fire-eyed, blue-eyed, gray-eyed and green-eyed. Finally, it is the Spiritual sign of Vedic belief, the native faith of the ancient peoples.

There is a legend about a sacred stone of Alatir. It is a ‘living stone,’ found in Iliriya, the plane of the heavens. On it grows the Tree of Life. From it, all roads leave and converge. It personifies the power and immortality of life’s creative energy. On Alatir, the Mythical Stone, always burns the Living Flame, and there, the Gods of Justice take their rest.
From Alatir, the center of all the seen and unseen, the light of the Good Fortune of the Gods is born, and from there it shines forth. The power of Alatir is as infinite as the Universe, in the face of which all faith, power, existence, all the worlds themselves are only as tiny particles.

Not just a stone, or even a mountain, the Alatir is the sacral center of the world. It is three-fold, in that it draws the path of Prav, world of the gods, the spirit path, which leads between Yav, the world of form, and Nav the mental, astral and ethereal world, between distant and celestial worlds. It is two-fold, in that is both small and great, both light and heavy. It is one-fold, in that, in it, all worlds are integrated. Like Prav, it cannot be learned. It is the stone of beginning, that bears the wisdom of the Gods into our world. Like the book of the Vedas, descended from the heavens, and Gamayun’s magic bird, Alatir is the intermediary between the worlds – as the book and bird, so is the Mythical Stone.

Many people look for the actual location of Alatir, the Mythical Stone, the stone of knowledge and power. But at the same time, we must remember that a particle of a white stone of the Gods lives in ourselves, in our aspirations to the knowledge of divine true wisdom and all creation – therefore the power of this stone in our life depends only on ourselves.